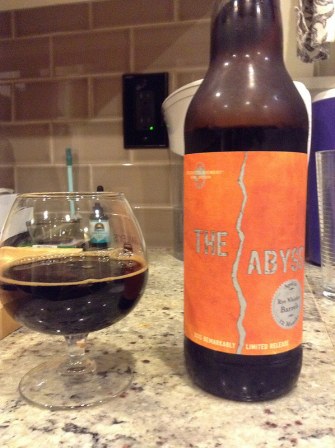 I had the opportunity to get one of the latest spins on the Abyss: this particular batch was kept in rye barrels. It was a rather expensive beer, $25 instead of $18 for the regular stuff and I get it, this is a premium product made from a premium product.

Still, it’s expensive and that raises expectations. You can’t get around that in Portland. I joke with my friends about this because Portland is spoiled for selection but the other half of this is: We now expect a lot for our money.

The nose has a massive whiskey dose that’s almost repellent it’s so strong and difficult to get past initially. After the first wave is over, there’s a warp and weft of chocolate in that booze and a touch of maple.

The beer itself is not terribly thick on the tongue, which is a bit of a surprise. Given the style and the conditioning in rye casks, I was expecting more density. Chocolate is very strong here, the dark bitter kind and I don’t get anything in the way of coffee at first. A little sweetness and we’d probably have a hint of that espresso bean taste that Elysian’s The Fix executed so well.

Later on, as the beer really warms up, coffee appears and becomes the dominant flavor in the finish. But it’s not sweet; this beer really wants to push the bitter aspects of those flavors, relying on the rye barrel notes to provide any sweetness.

At the moment I don’t really feel that it is. Yes, this is drinkable but it’s not so amazing that I want all my friends to try this. It’s not worth raving about.

But I don’t have an extra 25 bucks to store this beer and see if it gets better.

Which opens up one the question: if you sell it, shouldn’t it be drinkable now? I think it should. I don’t object to anyone who wants to cellar a beer for themselves, but damnit, if you’re going to charge me so much for beer, I should be able to drink it immediately and get my money’s worth. Having me store the beer for you for an extra year in order to get the best product is basically charging me time and space.

I don’t go for that.