Some friends have refrigerator filled with interesting beers from years past. They’ve been collecting for a very long time and are beer people of the first order, so the collection has become pretty extensive.

Truthfully, I’m underselling it: the fridge is stuffed, bottles and cans in every possible nook of the thing and they decided it was time to make some space. So they invited a bunch of people over to try some beers they’d pulled out…mostly, I think, so they could make room for more beer.

I ain’t judging, because it allowed me to take notes on a whole bunch of stuff that I would never have tried otherwise. So I present my mildly edited notes. Where I could find out the year of the beer, I added that in.

Final word: if some of these notes don’t seem very detailed, that’s because I had 2 ounces or less of each beer. Readers may notice that there are a lot of beers listed and drinking so little not only allowed there to be enough beer for everyone (there were roughly twelve of us), it allowed me to be sober when I left the building. What it didn’t allow for was an in depth examination of the beer.

But that’s OK. (Some corrections have been made as the hosts gave me new information). 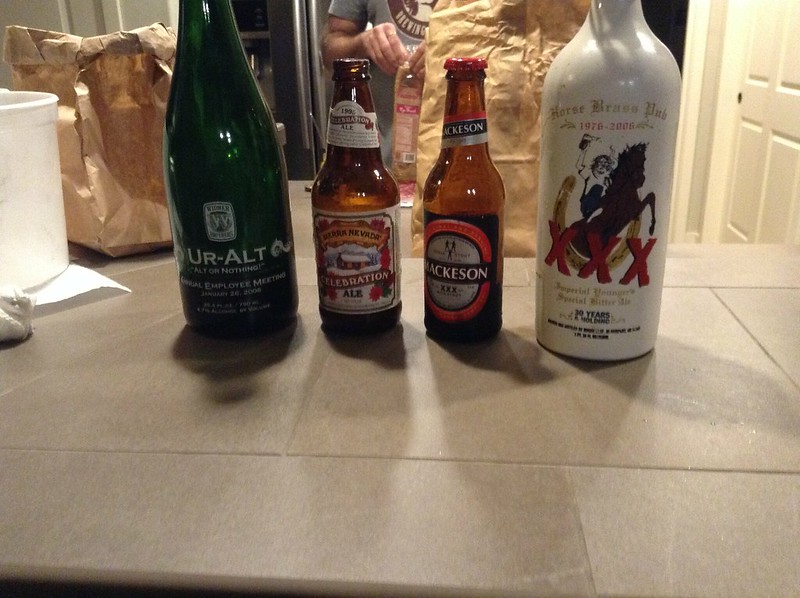 Sierra Nevada 1995 Celebration: liquid caramel. Just a tasty, smooth beer, warm going down, raisin in the nose like a sun-ripened beer but in a good way, instead of what typically happens when sun hits beer.

Widmer Ur-Alt, 2006: nose is flat and I don’t get much off this, faint raisin liquor scent. The flavor has a bit more papery not very full. Not digging this one.

Mackeson triple stout: this also doesn’t have much nose but it tastes like a chocolate soda. This is a compliment; the beer isn’t too sweet by any means but the bubbly finish really makes me think of cream soda.

Rogue Horse Brass 30th Anniversary Ale, Imperial Bitter 2006. This one is definitely weird. Thin mouthfeel but the flavor tends toward vinous. Something leaning towards tartness, especially on the finish. Which is really weird! Do I like it? I want a little more to find out.

Hair of the Dog Michael 2009: flanders red ale. It fizzes in my mouth like a sweet tart candy and it tastes like one too. Which puts it dead in my alleyway for sour beer I like. It’s brighter than the Dutchesse but this is the first HotD beer I’ve had in a long time that I have really enjoyed. 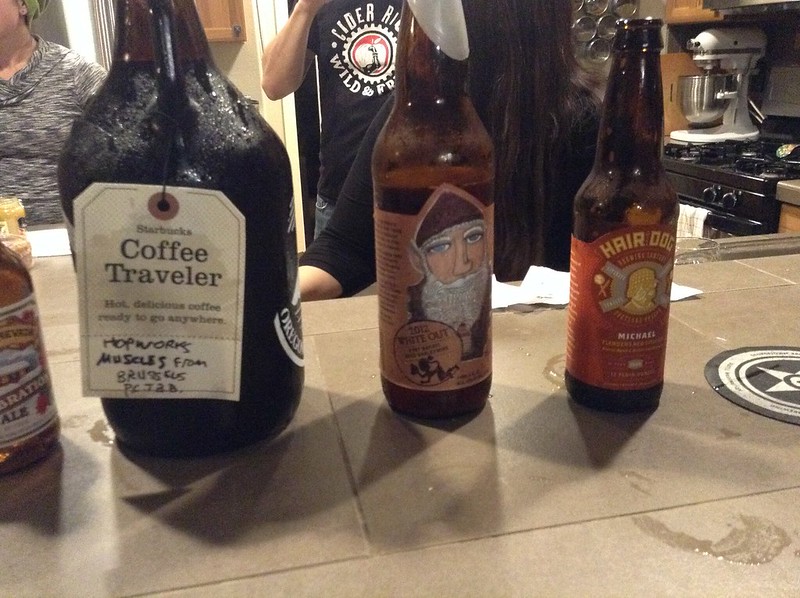 Hopworks Muscles from Brussels: I’m told this is from the 2011 Belgian Beer fest. I’m OK with this. I can’t tell you why-it’s warming going down but it’s a bit too sweet as well. I don’t want to have more, yet I don’t hate it.

Burnside White Out 2012; this has been stored in port barrels and whoa, it shows. There’s a bit of woodyness on the finish and this beer is one I want to filch more of.

Terminal Gravity Festivale 2008: I’m scraping this off the top of my mouth and something just has  gone awry.

Roots Epic Ale 2008: chocolatey nose, which is good since there’s an inch of foam for me to sniff at while I wait for the beer to settle. The flavors are complex all the way to the end, chocolate, dryness, but it tastes oxidized and old. Just not quite working for me.

Portland brewing Bobby Dazzler Holiday ale: this is better than the Rogue Brewer but….that’s not saying much. Cardboard & chocolate.

Stone Vertical 2007: This is wonderful. Everyone is focused on the Abyss, but this beer has some caramel notes that give way to some fruity ones, like a pineapple sauce over caramel. Gimme more of this if I can have it. 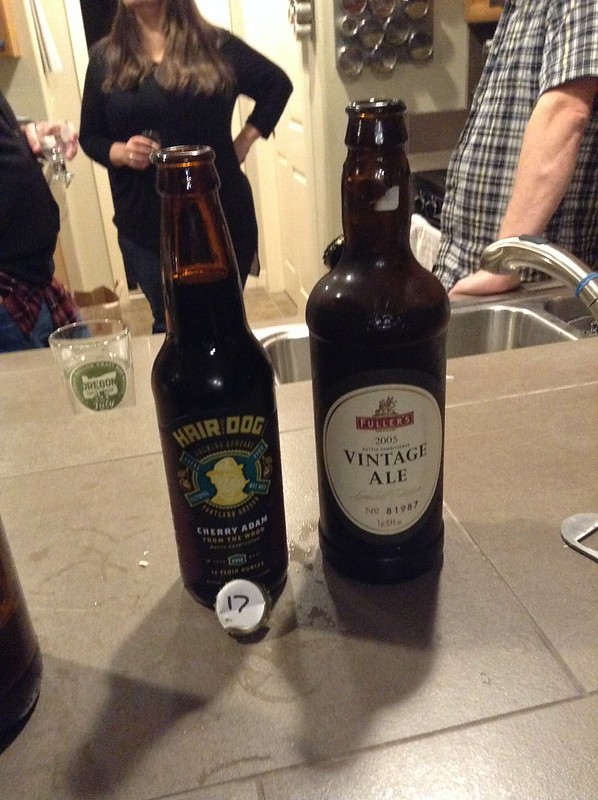 HotD Cherry Adam from the Wood, 2012: It’s got cherry in it, alright and is pleasantly syrupy. The cherry is a definite plus because without it I think this beer would be too sweet for me. But as it is, this is a really nice post-dinner beer, the kind your parents would sit down and drink with their friends, pretense of class in their postures.

Fullers vintage 2005: Hint of red wine grape in the nose. That flavor carries the day in the mouth, too and then it finishes fizzy. So; red wine spritzer?

Deschutes Mirror Mirror 2009: Some bready nose and some good caramel front but the finish I’m just not certain about. It’s offputting, dry paper texture in my mouth leftover, I don’t want more of this. Sad.

Rapture Olde Ritual brown ale. Has a slightly funky lagerish nose. But the beer is…my Dad would really like this. Sweetly tipped coffee, light on the tongue and very drinkable. 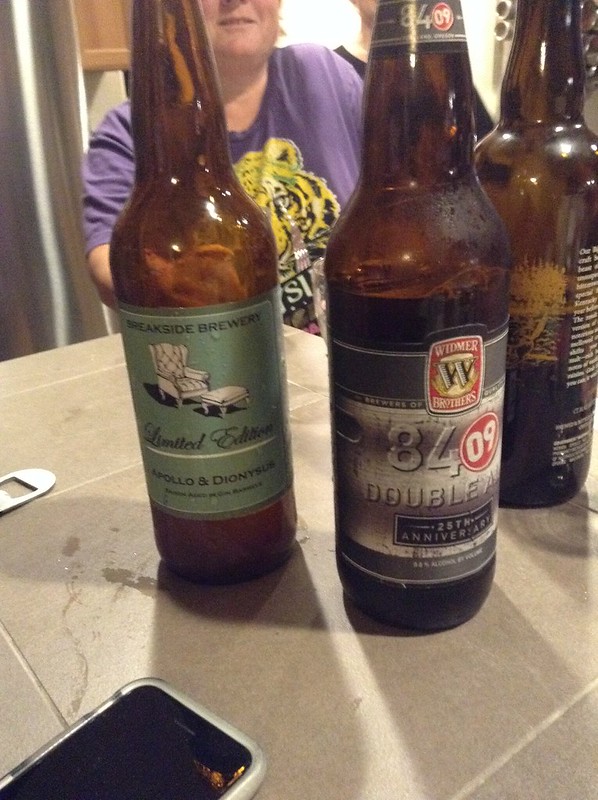 Breakside-Apollo & Dionsyus: saison aged in gin barrels. Oh, the pine that slides in at the end of this beer, following the path of some nice flowery flavors. Man. It’s good. Refreshing! In a way that a crisp lager is on a hot day.

Widmer 84 09 double alt: “It’s a carmel bomb” one of the guests says. He’s not wrong. It’s light though, not sticky dense and there is a rabbit punch of bitterness at the end to keep it from being all sweet all the time.

And there it is! Special thanks to the hosts of the McPolanders Tap Room, Jenn and Jeremie. They were great hosts.

2 thoughts on “A Dent In The Cellar”