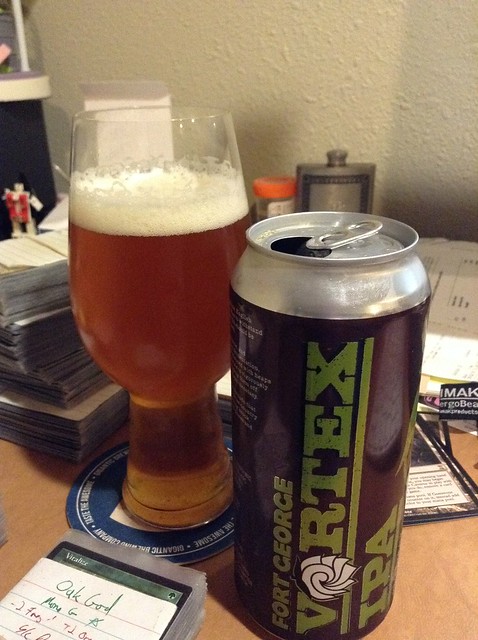 ‘There’s just so much stuff, I never have any idea what to take’, my Dad said as we browsed for beer. To which I replied, ‘That’s why I’m doing the reviews!’ so let’s get back to it, starting with Ft George’s Vortex IPA.

Nose smells like pot. The hop additions skew heavy towards that dankness and pine but after so many grapefruit IPAs I have to say that it’s a relief to experience some variety.

There’s a solid malt quality  before the bitterness of the finish but somewhere in between I’m getting…watermelon? Yep. There’s a quality there that I associate with watermelon, a watery vegetal bitterness I’m not that fond of. It seems to give way to a more grainy flavor as I get further into the glass. That is a good thing for certain but it makes me a little wary of my own senses. I’ve slowed down my sips of this beer to try and get a better grip on it.

Restarting with a new beer, the watermelon influence isn’t notable. Was I mistaken or has the cold temp of the new beer blunted the flavor? I don’t seem to get the watermelon in this glass but in the end I have to approach with caution.