I just saw Avengers: Age of Ultron for the second time and what hit me on the second viewing is that AoU is about identity. Do these people know who they are? What starts to define them, when their life is one of conflict? Who is a monster, who can you trust if secrets are being held?

Now it all plays out with bombast and clever quips onscreen but the reason I think of it in this moment is because I’m at the Old Gilbert Road bar, which used to be Catican’s Corner. CC was a bar oft populated by bikers with live music and generally shitty beer. It had a culture and a vibe and you weren’t going to mistake it for someplace else.

The new place doesn’t have music: instead there’s a big TV screen over the stage area and another one above the bar.  The bikes are nowhere to be seen. There’s a terrible cover of Tom Waits’s I Don’t Want To Grow Up by some country singer on the PA. The beer selection is vastly improved, at least.

A man who I believe is the owner is making out with his ladyfriend next to me and man, does anyone need that? But, if you own the joint… 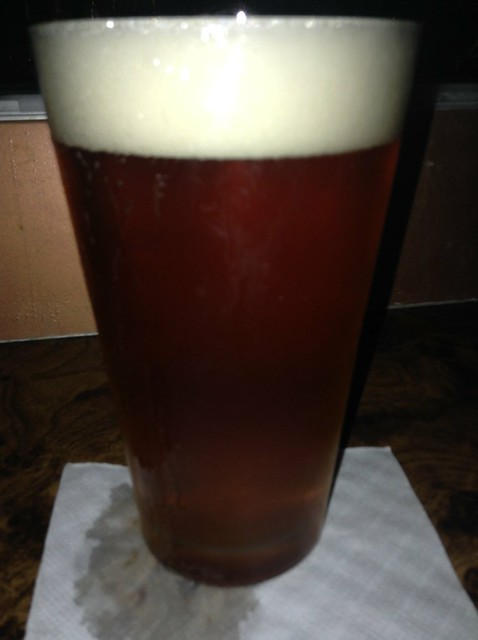 I guess what I’m saying is; the OGR is too new to have a personality that I can identify. Who is this place for? I don’t exactly know.

However, it’s got a tidy crowd on the weekend which means that maybe there will be time for the OGR to develop a scene beyond the sports screens. I’d like that. Sports bars are by default generic. Places that can exist anywhere can’t help it: if they were unique, then they might put someone off who is afraid of the new. That’s one reason sports bars go for such over-the-top advertising, I think: they want to get their patrons to believe they are somewhere unique and different, while being as ‘same-y’ as possible.

I will say, the Old Gilbert Road has a start on some kind of ambiance: there is Bernie Sanders poster next to one TV and there’s a quote from Big Trouble In Little China on the marquee in front. The pool tables have been refreshed with purple velvet instead of the traditional green. The opportunity for this bar to snowball a sustainable crowd and create a personality is there, I think. I hope it gets a chance to show off what that is.

My Ninkasi IPA is a bit sweeter on the finish than I would’ve expected. It has the bitterness stand out maybe a little too sharply. But it’s almost done so I don’t mind. Some nights, it’s good to go home.