Six years ago or so, I had this beer with my then girlfriend and another good friend: the beer tasted like Mexican hot chocolate; slightly roasted, hint of cinnamon, chocolate weaving in and out. We spent ten minutes trying to figure out what was in our goblets. Jokes were made, discussion had, it was a Pretty Good Night. Eventually, the lady got a raspberry lambic and someone, maybe even me, had the notion to blend the beers. The result tasted like chocolate mousse with raspberry sauce drizzled over it.

I’m not sure if I’m trying to recreate that memory or not, ordering this beer now. I can’t, no matter what; I am alone, the friend is far away, the girlfriend is an ex and the beer isn’t the same. There’s a goddamn metaphor in there if you want to dig for it: I don’t. 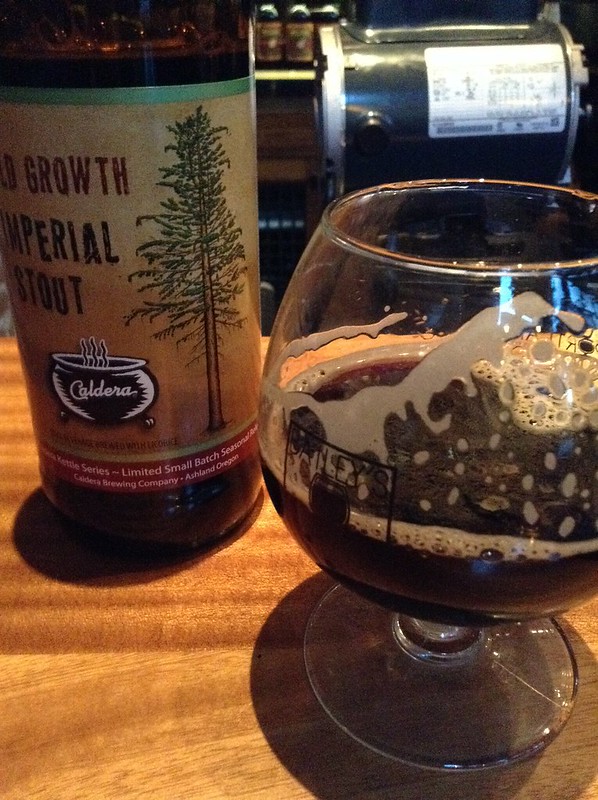 But is the beer still good?

It’s not quite as good as my memory but I suppose it’s worth asking: What ever is?

I don’t want to chase that ghost. It’s not worth it. That said, I am back at Bailey’s because it’s comforting. That’s probably why I got this beer, too: I recognize it and I know it’s good.

Let me not provide the wrong impression: This stout IS good. Based on how it comes off my palate, I’d tilt towards calling it a porter. This has a lot to do with the fizz on the middle of my tongue, cutting off the potential acrid notes of the dark malt. I think if I drank coffee every day, I’d be all over this beer.

There’s something that lingers around my tongue, a viscosity that helps this beer earn its stout marks. The stout definitely has more flavors than coffee & chocolate going on but I don’t think cinnamon is the correct note here. It’s more woody than that, not as spicy.

Time is not kind to my beer though. Something a little vegetal comes up in the nose as I pour the last of the bottle into my glass. That next sip is not as pleasant and though the scent disappears by the time I want to take my next drink, I can’t say I’m as impressed with this bottle as I have been in the past.

One thought on “On The Rail: Bailey’s (Caldera Old Growth Stout Edition)”