The B Side. Here we are. 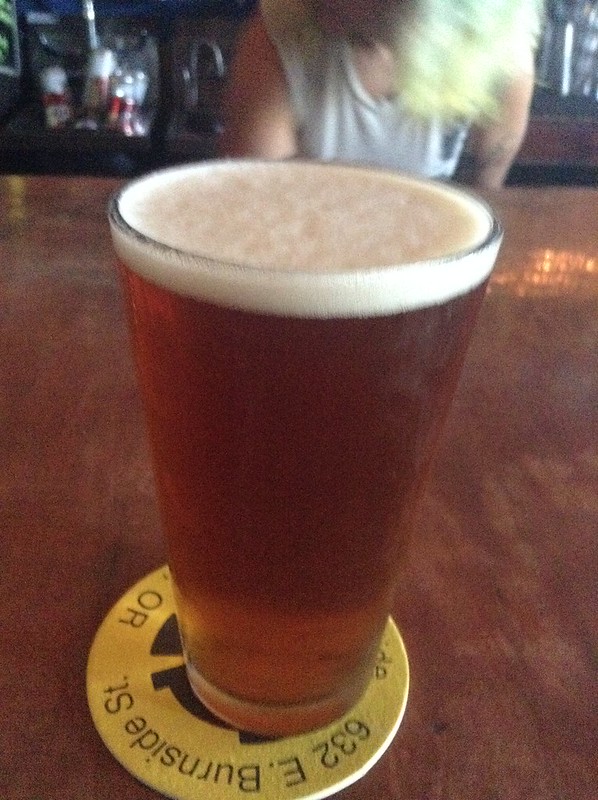 “Darlin’,” the bartender asks a regular “want some vodka?” He declines, relating his soon-to-attend bachelor party, which will involve seeing Devil Makes Three and a party bus.

“Oh man. We don’t allow party buses here,” she smiles at him, knowing the kind of trouble they bring.

The beer fridge is covered in stickers, 95% band related, all of them carefully placed so nothing obscures anything else. Next to it, a framed posting for a dance at the Norse Hall in 1946. The black paint on the ceiling looks like a transient’s underwear,  a staggering victim of cigarette smoke, peeled paint, and water stains. A sculpture on the wall that is framed by a collection of bicycle gears, all the same shade of rust.

I’m almost certainly here too early. The sun is still up; everyone who is anyone here is sitting outside. I’m on the rail with three old men..am I an old man now?..and a Workhorse IPA. Another fellow comes up asking for tequila & lime shots. I’m sure he’s in for a hell of an evening.

“The other shot?” she asks, wondering who it’s for.

“Lady in the restroom.”

“She in the Chicago shirt?”

A conversation about living in Chicago launches off. Looks like my bartender might be thinking of picking up stakes with her two kids and living in Illinois. She’s left the collection of glassware and ashtrays from the outside on the bar in front of me so at the moment, I can’t say that I’d discourage that; suddenly everything I put in my mouth is tinged with ashes.

There’s a teddy bear hung by its neck from the ceiling about fifteen feet from me. A painted scimitar on the wall, creepy Cookie Monster paining behind me, signs to sell panties that say, “I like it in the B Side”. $15 bucks to tell someone you like to get fucked in the ass. Usually that’s free but if you want to pay for it, I’m not going to stop you.

Another two men come up “Can I get a Rainier?” He can. “It’s all I ever want,” he says to his bearded, bespectacled friend, “It’s like a Lone Star.”

There’s an endorsement. They quickly head outside, thirst quenching acquired.

I’m only halfway done with my beer and suddenly I want to go home. I’m alone in a bar with a face full of ashes in what must be the ultimate in Portland hipster dive. I can’t tell what’s affected and what’s authentic and it’s getting to me. It’s not a bad place but my IPA tastes thin and my tolerance is even thinner.

It’s a shame. It seems like a friendly place and I can’t stand it.