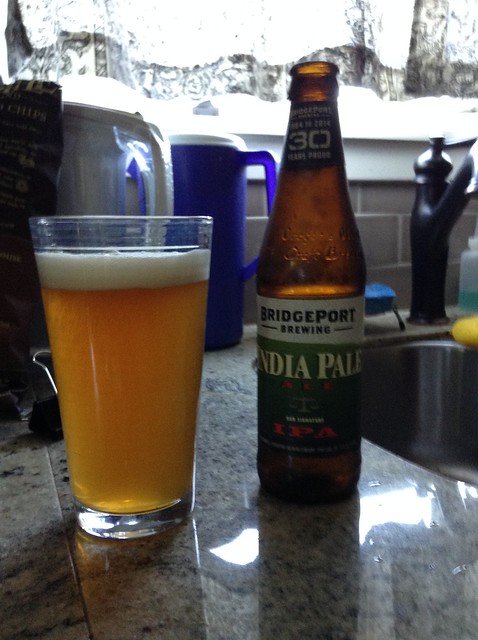 The fine people at Bridgeport told me their best selling beer year ’round was their IPA (with Hop Czar occasionally jockeying for first as well). I haven’t seen the Hop Czar yet but the IPA is, of course, all over. So let’s get cracking!

Pine in the nose but nothing too strong. The beer itself reads a bit like this too; the hops have a nose slightly reminiscent of what I’d get from a commercial lager, in addition to the pine. Familiar but not.

There isn’t too much malt on the tongue but despite that, the bitterness is fairly restrained. This ale isn’t flavorless by any means but it’s not very adventuresome either. Now, I have to admit that this isn’t a bad thing. If someone didn’t know what else to buy and bought this, I don’t think they’d be sad about it.

I just wonder if they’d be interested after that.

To it’s credit, the IPA holds up nicely over the course of the drink. The nose doesn’t falter, the head remains steady throughout and a little more malt arrives as the beer warms up. Overall, I have to say this is a solid beer, the kind that might just lure someone who IS interested in craft beer into trying something else Bridgeport does but the limitations of needing to appeal to such a broad audience means that I am not feeling the hook.