It has been a long, long time since I’ve been to the Moon & Sixpence and that’s a shame. The rail here is warm; pleasantly lit and wood of various shades and shine. It’s also flat, so it’s easy to rest my arms on and lean in to talk to a friend or whisper to the bartender.

I should try an get into northern Portland more often. Breakside, Columbia and Laurelwood have brewpubs here, just to name a few. I can’t think of places in southeast Portland that have a similar representation. Yet somehow, the bars I want to attend are in that location. Or Bailey’s, but nobody can argue with going to Bailey’s.

There’s a whole city out there to appreciate and the Moon & Sixpence is reminding me that I should get out and see more of it. 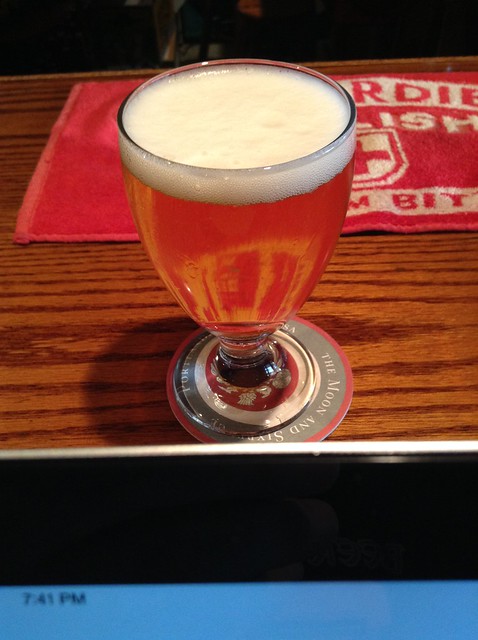 I get the Lucifer belgian golden ale because of the name. How can I not? The brewery is unknown and I don’t have it in me to research it, in part because of how it tastes. It has a fruity boozy nose with feeling of warmth and flavors of banana like going down. There’s a white wine element too and I’m not sure how to identify it. Floral in some respect, that’s for sure. My friend says ‘This tastes like antibiotic cream and honey’ and I’m not inclined to dispute her.

So, the Lucifer isn’t a drink I can recommend. Unbalanced and not very rich in flavor; I’m about as displeased with this beer as I am pleased to be at this bar. The susurration of conversation is steady and lacks the boisterousness that might be present at another bar. Right now, it’s a good thing.

I’m still recovering a bit from the PCBF. Long day, heat, beer means that going somewhere that would be intensely lively just doesn’t suit my mood. If it wasn’t for the Decemberists playing in this bar, I’d say that there’s practically zero hipster presence here. But I can get over the “we play accordion because Portland” songs for a night.

2 thoughts on “On the Rail: Moon & Sixpence”