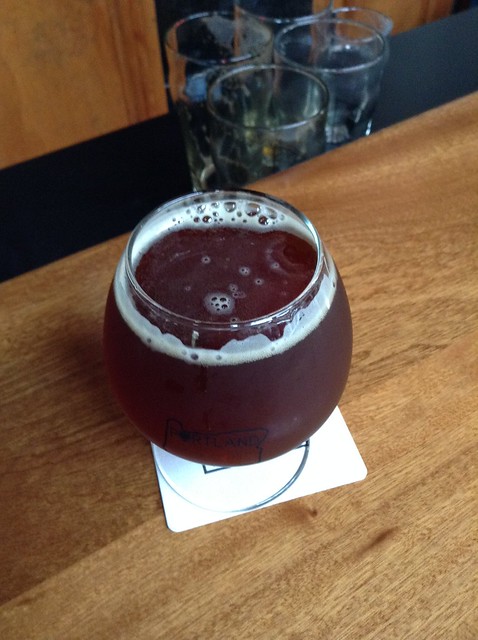 I have gotten the Unita’s ’14th Anniversary Barleywine on the recommendation of a new bartender. The beer is a complex one, I can’t deny that but the acridity of the dark malts overwrite everything on the back end. It doesn’t matter that the nose has subtle toffee or that there is something in the midrange-it’s all blown out by the finish which, the more I sip on it, the less I enjoy it. Burnt coffee is bad.

You win some, you lose some, right? I had a surprising number of choices tonight-IPAs, Blondes, Imperial Reds- but I made this choice and there’s no going back. That choice isn’t eternal and I keep this thought in my mind as I drink the ale. Choices are for now, not forever.

I’m torn at this point, because I would like to get a (small) ale to replace this one and my options are among three breweries I have not heard of and one I know will be excellent. How I decide to make this decision is more complicated than one might think.

I believe I’ve shown a willingness to try any beer I haven’t had before. I refer to myself in this sprit of adventure as a Space Monkey: someone has to go first, try the new thing, get shot into space. Might as well be me, right?

Buuuut. I just got burned. Don’t I deserve something safer? Something I know is good? “Good money after bad” is a sentiment that comes to mind, along with a whole host of voices and advice about what is ‘best’ and the fact that I know there’s an exceptional beer up there (Green Mammoth) that I don’t get to have very often. I’ll be passing up an opportunity to have something I know I’ll enjoy, all to have an experience like this barleywine? Why the hell should I do that?

These decisions feel whimsical. Sometimes I go for the known quantity. Usually under the justification of ‘I deserve this’. Sometimes I keep pulling the lever on the bandit, trying to hit the slots that give me something nobody else has had a chance at and I can’t say what drives me on those nights. Ego? Thrill of adventure? Apathy?

Tonight, I go for the new thing: a Snipes Mountain IPA. It’s called Father Wingbat and if you haven’t been a long time reader of the blog, then it’s my pleasure to tell you: I go for beers with weird names, especially when they want to evoke fictional monsters. And Father Wingbat sounds like the leader of a Batman cult, so I’m in.