“Have you ever been to Growler Guys?” Aaron asked me.

“I haven’t but I’ve heard about them.”

“I had a good experience there,” he said and that was all it took.

So here we are. There’s no place to sit at the rail; it is, instead, a true counter where you order your beer and then find a table. I ponder my choices-GG may be a chain but it’s got a nice selection of beers and they’re smart enough to tilt my options towards Oregon at the Portland location. There’s an interesting saison from Off Color I have a taste of but it doesn’t strike me like the kind of beer I want a pint of. 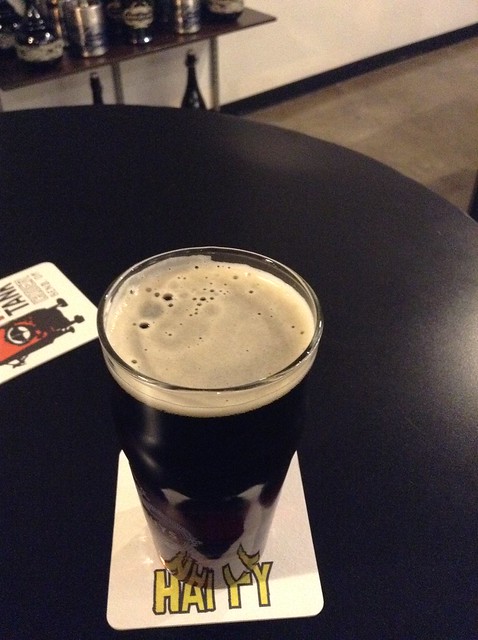 I settle on Alesmith‘s Nautical Nut. It’s a brown ale and the nose is like chocolate frosting, so I’m in for that. As it warms up, coffee flavors start to appear so the ale doesn’t ever come across as being too sweet. I’m one-quarter though the beer before I know it: A good sign, speaking to the easy to drink quality of the ale but I’m starting to worry that my description will be lacking because it’ll gone too soon.

I also paid $5 for this beer and I am uncertain that it is a pint. For five bucks, one should get a pint.

It’s also uncomfortably quiet at the GG. This would be OK by me except for the reggae music that’s on. I’m always going to prefer silence to reggae.

Still, that there’s almost no one here and that seems strange for a Saturday night. I wonder if that’s because it’s a chain? Two televisions-both set to sports stations-and a total of seven patrons counting myself, none of whom are paying attention to them. It’s not unpleasant and it’s well lit enough that I could play cards here (always a virtue for me). It’s not extremely distinctive though and while there is a nice spread of beer selections, they aren’t particularly off the radar. Plus, with the Commons, Green Dragon and Cascade Ale House within a two block radius, a legitimate question to ask is: why would you come here when you have local options that are right there?

But that is an issue with location, not service, selection or atmosphere (except for the reggae). If this place was in an underserved neighborhood? I’d be alllll about it.

My beer is nearly empty and it still smells like chocolate cake. If nothing else, this beer is goading me to make a brown ale again.

2 thoughts on “On The Rail: Growler Guys”