The Collaborator project is a contest that Widmer and the OBC hold every year, where homebrewers submit what they feel are their most commercially viable beers for judging. It’s an interesting contest, because adherence to style is less important than the overall appeal of the beer. The winner then gets to have their beer brewed on Widmer’s small system for distribution around town! It’s a pretty cool project and I happen to know one of the winners of this year’s contest, so when they had a tapping of the beer last night at the Horse Brass, I went to check it out.

I also stole a couple of moments with the brewers, Jenn and Jeremie McPolander, who were nice enough make time to tell me a little bit about the Kenton IPA they made. The story goes that they’ve been trying to make a great IPA since they bonded over the style on their first date, years ago-at the Horse Brass, no less. With the Kenton, the beer was actually an experiment between Gigantic and Hopworks ale yeasts and they happened to like what Gigantic’s yeast did a little better. The beer itself was a last minute entry but the risk paid off, clearly! When Widmer and the McPolanders went to brew the beer, Gigantic was awesome provided yeast for the beer, so they could really get what they wanted. 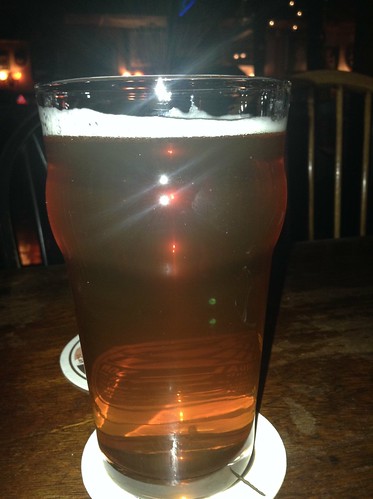 This beer finishes very crisply. Spicy hop note, from Amarillo hops according to the notes, leading into bitterness appropriate for the style but it comes off the palate nicely. Lemon notes finish it off, with a tingle of effervescence.

The malt is very subtle for me; it’s there but I have to work it between my cheeks to really pick it up. The Kenton is pushing the NW IPA angle and it shows. This beer is for hopheads.

But not just hopheads! What impresses me most about this beer is how drinkable it is. I promptly want more after setting it down. It’s definitely hoppy, no question about that but it isn’t overpowering and it’s so clean that it really encourages multiple sips. I’m told this is the first IPA that has been selected for the Collaborator and it’s a worthy entry.