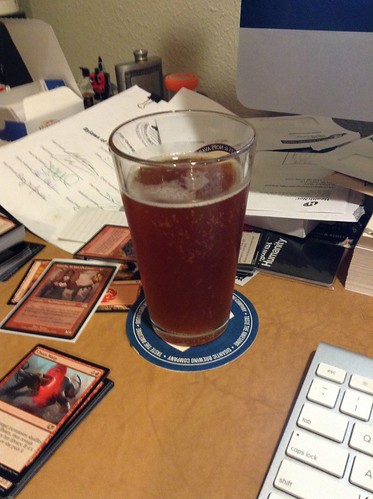 It’s nice to finally have a beer come out without any significant flaws. Having three beers in a row get out from under me was starting to make me anxious!

This is the first beer I made from hops that were given to me by a friend. Hops I don’t know the variety of but who cares? Free hops are free.

However, there is a nice spiciness to this beer, both in the nose and on the finish. It’s not very forceful but it exists in just enough quantities to give this beer a little dimension. I’ve also used this with a chunk of wheat malt, which was to give the beer some body, something to stand on in case the hops didn’t work out. Fortunately, it’s unnecessary but as you might be able to glean from the photo, the beer isn’t extremely clear as a result of that. (I think).

I suppose you could call this beer a pale, although from a color perspective it doesn’t really look like it, from a hop perspective I feel I can safely put it in that category.  Also important to note: while there seems to be a lot of hops in this beer by weight, those hops haven’t been dried out, so they’re all still full of moisture after being picked. Their overall impact on the beer is lessened because those hops are adding water to this beer where ordinarily they would not.

Yeast:
3rd use of German wheat ale yeast from Wyeast