Because I had company, I was unable to do the full day at Bailey’s for their 7th Anniversary event.  This worked out though, because I was able to get in on a tasting upstairs instead, which was really wonderful. It was a mellow event where I could sit down and get some good notes taken and enjoy my beers. As a bonus, there were some very tasty things to nibble on while I  had the beer, so I started seeing what happened when I combined some food with these ales and was quite surprised.

As always, congrats to the people at Bailey’s for another successful year.

Nebraska Apricot Au Poivre-Saison. This is like a white wine spritzer. I mean this in the best way; it’s light and tart, and despite the visual cloudiness of the beer, it tastes very bright. There is a black pepper note at the finish too, but this tweaks the beer in a way that I’m not overly fond of. I know this would go over like gangbusters with some people but for me, the saison elements are so overshadowed, I can’t quite get into it. There’s a peachy faintness to the nose, barest whiff. I dig that but the beer overall just doesn’t make it. Offset with a little apple though, and this beer becomes much more palatable. 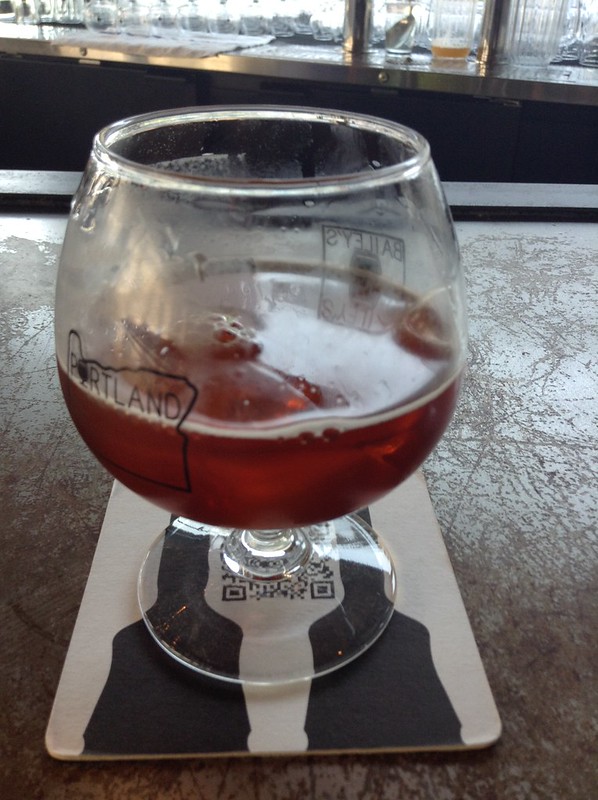 Firestone Walker Agrestic-American wild ale.  Nose like bourbon and sprite. Light, bubblyish nose, even though I am not tickled by effervescence. Flavors are that way too. It’s a sour ale, but extremely restrained in its presentation. Lemon twist finish that doesn’t linger at all. It’s hard for me to get a handle on this one. The sour qualities (again, referencing a white wine) overrun much of the other flavors but I’m not unhappy about that. Then I get my hands on some very sweet raisins and eat them. This beer shifts enjoyably when offset by a touch of sweetness. Otherwise, it’s just a bit one-note.

De Struise Pannepot Reserva-Belgian Strong Ale.  I get some french oak barrel nose. Maybe a little chocolate and maple, too? An undercurrent of vanilla, just barely. Very, very smooth beer. The alcohol warmth doesn’t arrive until it’s in my belly. Part of me wants to suggest that this beer is thin,  but I don’t think that’s the case: I think it just finishes really lightly. The dark malts-some flavor between chocolate and coffee, but not definitively either-ride my tongue easy and then disappear when I finish my beer. A bit of parmesan cheese and a little salted almond and suddenly this is a fine ale to have things to nosh on. Not quite as awesome with brie so I think the sharper/saltier flavors are the way to go here.

Block 15 Super Nebula- stout. This tastes like chocolate soda. Holy moly. It’s amazing. The saltier cheese I had kinda works but not exactly. The nose is such a nice chocolate nibs scent but with sweetness that it’s impossible to resist. The beer itself: good, though it finishes a touch hot at the very back of my throat. It is a nice sipping beer. I want to swirl it while I pet a white cat and plot the demise of my enemies. Oh yes. Let’s kick the crap out of something. Get evil. I want it.

Against the Grain 70K Imperial Stout. No nose that I can tell. Hm…well. Let’s get a sip of that and….yeah. Let’s put this over a scoop of vanilla ice cream, which is on top of a waffle and let’s GO. I don’t know that it’s got any lactose qualities beyond being very, very smooth but the bourbon and chocolate flavors rock the rocking; however they aren’t too friendly to sweeter compliments, (apple, grape) and the saltier options doooon’t quite work. A nice surprise: blue cheese. Huh. I would not have seen that coming. 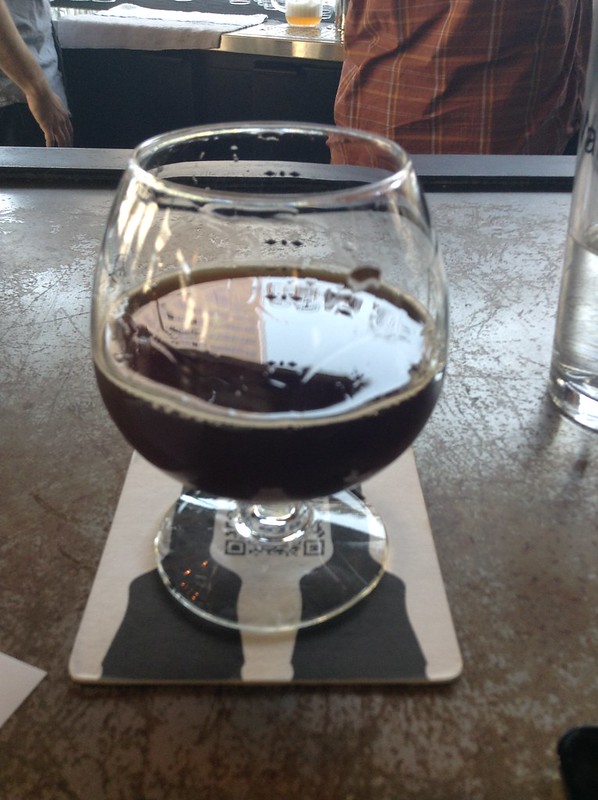 North Coast Old Stock Ale-old ale. Whoa. Warm, sweet, syrupy. Raisin present, too. Let’s get some pancakes, baby, put strawberries in ’em, then pour this over them and chow down. There’s a slow roll of chocolate underneath it all but this beer really, really needs to be consumed in small doses. It’s intense, the heat of it starts a little early and I’m hard pressed to find a proper compliment to it. Anything sweet is too much, and the saltier things feel like a turn off right now; maple sugars and salt just don’t feel quite ‘together’ here.

It hits me: sour, as in a sour ale. I pitch the idea of blending this beer and the Firestone Walker and it takes root; I get a little sip of a 70/30 blend of the Walker/North Coast, as blended by Geoff (who owns the place).

It works. The sweetness and volume of the North Coast compliment the thinner feel of the Firestone, while tapering down the sour qualities making the whole drink really solid. We should totally do that again.

One thought on “Bailey’s 7th Anniversary”