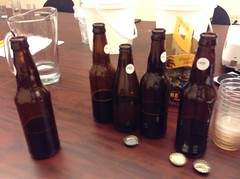 I was asked to be a judge for the Widmer Collaborator competition, which was really cool and I’m glad I got to be a part of that!

For readers who don’t know: the Collaborator competition is  one that Widmer puts on in conjunction with the Oregon Brew Crew. The winner has their beer brewed by Widmer and sold around town. This is a definite feather in the cap of the brewer and Widmer gets to brew an interesting beer which they might make and market later so there’s a cool symbiosis going on there!

The picture is of the six beers I got to judge and while I’m sorry to say none of them went forward, I had a good time judging them. I didn’t worry about style, I concentrated on one question: Do I want another?

It’s unfortunate that I didn’t feel that way about any of them, because there were styles I was hoping to see, including an American Brown and Czech Dark Lager. I love it when really drinkable but underused styles are out there! Alas, they just had too many issues.

There was an IPA infused with pink peppercorn that almost made the cut but it wasn’t carbonated enough. As a result, the beer just didn’t pop like it needed to: it inspired some good conversation but in the end could not be recommended.

I found out later that three beers were chosen: a vanilla pale ale, a stout and an IPA age on Spanish cedar and I look forward to trying those!