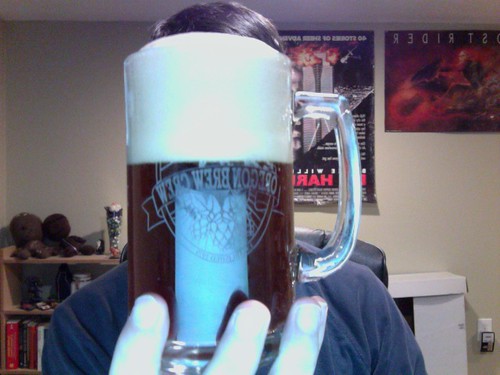 I like this photo but it’s not representative of how foamy the Sor-Rye is, for the most part. It’s pours a good head on it, fir certain, with some nice grassy notes in the aroma. Doubling the amount of Sorachi Ace hops does seem to have done the trick: I’ve got a nice hop presence throughout but…I was expecting something more lemony, more citrus.

When I was describing this beer to a pal, he said; How did you come up with the recipe? And I told him I’d read about the concept in a book and thought it sounded good.

“So, you’re expecting it to taste like something but you have no idea how it should taste?”

Oh. Well when you put it like that suddenly this beer seems as lot better. There’s a nice malty streak in the middle, a bit roasted as something one might find in a scotch ale. I’m going to chalk that up to the red wheat malt, which was a new addition for this beer. It worked.

I think that Sor-Rye needs a little hop variety. The Sorachi are fine but maybe something to help accentuate either the nose or the bitterness might help this beer stand a little taller.

That said, it’s a good one and will probably go into regular rotation.