Spring has shown its face to Portland, flashing a bit of leggy sunshine before reminding us why umbrellas are a fashion statement. I’ve come to the Slingshot because it’s close to home: The rain is encouraging me to stay nearby.

Winter may have left us, but its crabby sister is here. 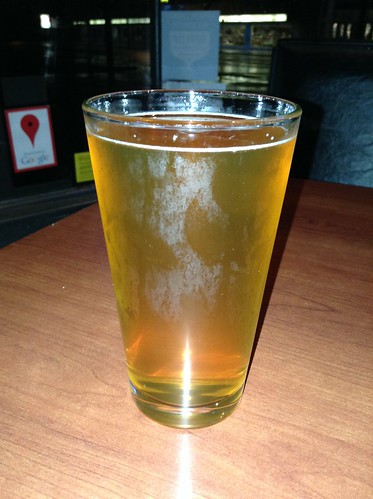 The Outcast from Crux has a lot going on there. Mostly citrus, but somehow there’s a vein of sweetness in there, keeping it from going off the rails. It’s bitter, don’t get me wrong and what I can get from the nose is in that citrusy hop family but…

The pour is a good pour for the kind of place the Slingshot wants to be: local punk rock dive. It’s not a great pour for a beer drinker, because there isn’t a lick of head on this. Still, I think it was poured into a non-chilled glass so you take your pluses and minuses.

Doesn’t seem that late on a Monday but Foster Street, easily visible from my vantage, is a ghost town. Or maybe it’s just later than I feel. Spring is there, the light was up but the clouds have come to have their say in our lives and all we can do is let them speak.

Nobody else is noticing, nobody looks outside: I crane back to sneak glances at them.

If they are alone, they’re on the rail and to a person, they have shot glasses in front of them in addition to whatever else they may have. The knit caps, Dead Moon t’s contrast with a woman in a beautiful leather jacket with a bigger shot glass than anyone else on the rail and I realize, we have an upper crust punk bar. The city is getting cooler? Bigger? Hard to say.

Maybe I should make this my local. It’s a proper walk from the house: enough to stretch the legs but not so much that I get tired. Between the punk rock and the old school country on the PA, the music won’t annoy me. I can step out enough to breathe and the beer is good here. There are a lot of pros.

I wish I had someone to bounce the Outcast off of. It’s a good beer -very good- but I need some help. The finish is very, very crisp and the alcohol lingers on the tongue, competing with the bitterness. It siren calls for a sister and, as is often the problem, my glass is now half empty.

Still, on nights like this I’d want an extra Outcast in order to keep the rain from bothering me on the way home. Maybe I’ll have one anyway; it feels early enough.

One thought on “Where I Want To Go: Slingshot”