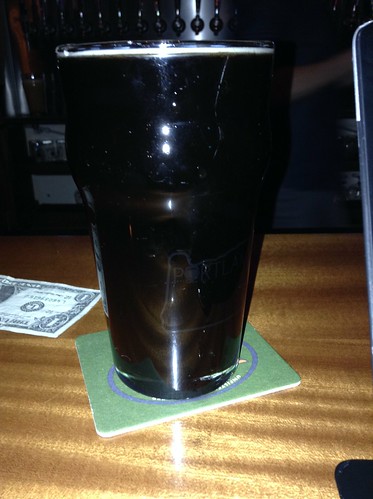 t was the kind of day where I needed a hug, and I wasn’t going to get one. People tried; long distance friends, some of whom have never heard my voice, sent their support and… Well, it was just the kind of moment where people’s kindness made me feel worse, instead of better. They are not to blame; they did what people who care do. Sometimes, a broken machine cannot be repaired with sheer will, you have to place your hands upon it.

But it passed, day moved on and I geared myself up to see Cloudkicker at the Hawthhorne theater-where, as you may remember, I don’t drink.

It didn’t matter. They were wonderful. I got to hear songs I expected, songs I ever expected and songs I only hoped for and I was hardwired, for just a few moments, to be happy. They played You and Yours, for fuck’s sake! The Christmas song! Sometimes, life dishes up a little scoop of amazing.

When Cloudkicker was done, I was done and now I’ve come to Bailey’s to have a wee heavy from Heathen, called the Fashious. It’s delicious, with lots of dried fruit-especially raisin flavors, but it finishes so light! Even with the oiliness at the end, it doesn’t linger unpleasantly, it doesn’t feel heavy. So good.

I like beer; I don’t think that comes as any surprise. However, I don’t know that drinking this beer makes me happy. It’s tasty and that’s good, and I like it but I feel at rest. Like there is a chance for the buildup of energy in my shoulders and the sadness in my side to drain out. All the energy; the good and the bad from the day. Music is a T1 line into something really smashing for me where a whole lot of other shit just sliiides away.

The Heavy has shifted a bit as I write, more caramel flavors coming out. It’s still very good and I am already thinking of people that I should recommend this beer to. I don’t know if I’ve had anything Heathen has done before but clearly I should try more of their wares.

Both the beer and the music and my experience with both have one thing in common: they are transitory. None of them last. So it is with the gap in my life where I am not able to get hugged. I have good will, I have work and that can sustain in these overcast spring days, until things change and I am rebuilt.

Who is to say how the new structure will be? Let’s have a beer and talk about it.

4 thoughts on “Where I Want To Go: Hawthorne Theater/Bailey’s”