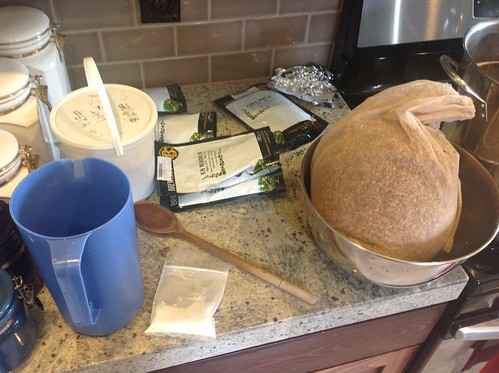 This is a picture of everything I’m using to make this IPA in the partial-mash style. There’s a bucket of light malt extract, hops, gypsum salts (the white stuff in the packet), and all the steeping malts. The blue pitcher is there so I can pour warm water over the grains once they’ve finished steeping and the spoon is to help me stir everything. I guess that’s kind of obvious but sometimes it helps to state that.

First thing to do is to heat the water to about 165 degrees F, because when I put the grains in, that will lower the temperature of the water about five degrees or so. Then I added a bit under 1/4 teaspoon of gypsum salts (in order to better replicate the water used in original IPA recipes) and added the bag of malt. Then I put the pot into an insulated box and let it sit for at least and hour, which will cause the temperature to drop a bit more, but not go below 150 degrees, which is what I want. Too warm and the chance for off flavors goes up, to low and sugars aren’t leeched from the grains. This batch, I believe I left steeping for 90 minutes.

I was instructed once before and I’ve just held to it ever since: adding just a little bit of hops as the wort is being brought to a boil 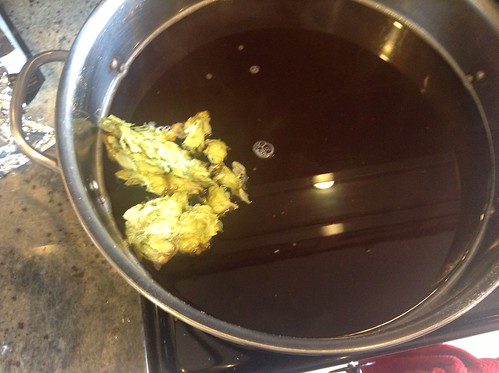 helps keep the bitterness from being too sharp. I have no reason to disbelieve it and since I still have to wash the steeped grains at temperatures of about 150 degrees F, and the rest of the wort needs to be brought up to about 205, there’s some time to kill. I may as well let some hops soak while I’m doing everything else.

At this point, it’s all about adding in more hops, which you can see the result of that from the post a few weeks ago.  My boils tend to go for about 70 minutes because when I add the light malt extract, that can drop the temperature of the word by about 10 degrees and it takes a little time to bring it back up. I still try and list my hop additions at 60 minutes and keep it as close to that as I can but there is a little fudging. When the boil is all done,  the only things left to do are cool the wort and put it into a carboy. 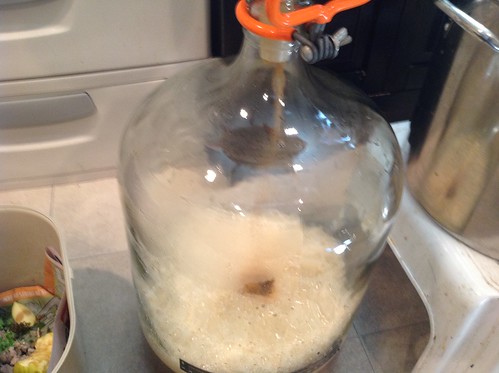 The carboy has been sanitized, of course, along with all the other equipment. The odd looking bucket on the left side of the last picture is a place for me to dump the hops into, as they get strained out of the wort as it goes into the carboy.

It isn’t the most majestic picture, I know but I was trying to take it with my iPad, which is pretty unwieldy under the circumstances. (This post actually told me I had to spring for a new camera).

After that, the yeast is added and I top the carboy off with cold water until it hits the five gallon mark (usually requiring 1-2 gallons).

And now we wait.

5 thoughts on “How To: Making an IPA”