This, is what my sister tells me, is how she’s describing me to my parents. She’s not wrong. I’m out of the house now because it is good to be out but I am traveling in a haze. Have I been to the Horse Brass for this theme? I don’t know and it doesn’t matter, since I’m here now.

On my way in I can see a vacated table through a window lined with Christmas tree lights. I hustle in because a free table is a rarity this time of night, but my hustle means I do not see Bruce until I’ve placed my stuff down. I know Bruce from our shared time on the OBC board and he’s drinking with a fellow I do not know. But I go over and say hi and we do the basic small talk until the stranger, whose name is David, says, “Well why aren’t you drinking with us?”

I have no reason to refuse. Plus, David wants to talk about scotch. I will gladly sit there and listen. He even answered, for me, the most pressing newbie question: do we put a little water or ice in the drink or is that blasphemy?

He answered with a smile, “No one can tell you how to enjoy your drink.”

Yeah, this is going to work out fine.

While David talks scotch, I get a Santiam’s Bluegrass Stout, a barrel aged stout. It is terrible; there are no notes of chocolate or bourbon in the beer at all, everything is being overrun by banana flavors, like children gone amok. No. David is recommending the Monkey Shoulder scotch, which I am told can be found at a liquor store downtown. Note to self: go find this.

Now, when three fellows sit together and drink, you can be assured of one thing; they are going to talk about how the world should be different. Two guys; they’ll talk relationships. Three: there’s always the hint of revolution and it’s about the third sip off the whiskey David has ordered that he starts up.

“I want you to imagine a world without money,” he says. Now often at a line like that, I would interrupt but tonight I just let him continue on. Turns out, David’s goal is for humanity to evolve to a place where we don’t need money to value people, where we do something better, because as it stands, and the whole table is agreed on this, the species is doomed. I keep listening because he says something similar to my Dad: if we’re going to live, we have to evolve.

Also, David subscribes to the 100th Monkey theory, which suggests that if enough people think about something-in this case evolving as a species-eventually that something comes to pass. Which I like, as it’s interesting and non-violent and Dr Whovian. Given all the fear mongering out there, it’s neat to come across people whose idea of change doesn’t involve blood.

The evening turns weird and that’s actually pretty good. I realize for the first time that nobody can see that I’m all fucked up and this is a chance for me to seem normal.

Normal is good, from time to time and I am grateful for that moment. The gentlemen graciously agree to pose for the blog: 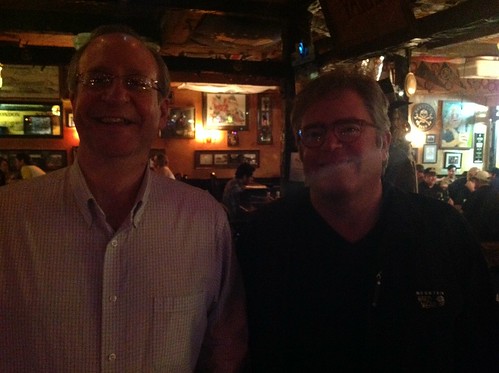 2 thoughts on “Where I Want To Go: Horse Brass”