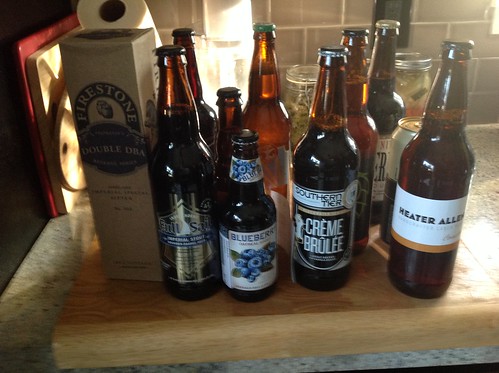 This is what roughly $70 will get you from Belmont Station. Sometimes you have to do that.

I’ve been steadily working my way through the bottles; now only the Firestone is left.

The Heater Allen I didn’t dig on; too bitter on the back end. The Lagunita’s Imperial Stout was a nice surprise, both reasonably priced and pretty tasty.

I don’t recall who did the blueberry stout but that was pretty well crafted too, with the blueberries in the nose but not too prominent after that. Fort George’s Otep was a fine IPA, as one might suspect and Southern Tier’s Creme Brulee tastes just like one. If you like that flavor, that beer is for you.

Full Sail’s Imperial Porter continues its streak as one of my favorite beers ever, Crux (hard to see there) continues to impress me as well. Finally, the Beamish was…no. Let’s not do that again. And the Eel River wasn’t bad for a pale but I got it on clearance and it was starting to show hints of age…